April 16, 2019
The Legacy of Kurt Cobain Lives on Around the World
By: Discover Grays Harbor
Back to: Blog

The name Kurt Cobain is synonymous with the grunge music movement that engulfed the ‘90s. As the former lead singer of Nirvana Cobain is, without a doubt, one of the most well-known musicians of his era. Although his life ended in ‘94 at just 27 years old, fans from all corners of the Earth are still intrigued by the legacy that he left behind.

A quick search of Cobain’s name on the internet brings up thousands upon thousands of photos, videos and articles chronicling his fast-paced life and career. As a Grays Harbor County local, primarily spending his childhood in Aberdeen, residents in the area are all too familiar with his name. However, were you aware that not only diehard fans, but journalists and movie producers from around the world have made, and continue to make, the journey to Cobain’s hometown? These visitors all enter the city hoping for a first-hand experience in the area that helped shape his life. References to Aberdeen were prevalent in many of the lyrics that he wrote and performed with his Nirvana bandmates. Although Cobain had a love/hate relationship with his hometown, his upbringing became an integral part of the music evolution that the band brought to the music industry in the late 20th century.

Hilary Richrod, a resident of Aberdeen, had a personal relationship with Cobain in the late ‘80s. At the time, she had zero inkling that the young man whom she chatted with while at work would soon become a rock star phenomenon known around the world. “BBC, the Russian Ministry of Health and MTV were just some of the many companies who have contacted me over the years to learn more about his life in Aberdeen,” explains Richrod.

As a reference department employee at the Aberdeen Timberland Library, Richrod got to know many individuals who came into the library on a personal level. Cobain was one of those people. “He came into the library quite a lot,” states Richrod. “I would take book requests from him and help him out when he needed assistance on the computers. He was a very sweet natured person who reminded me quite a bit of my brother.”

Not long after meeting at the library, Cobain showed up at Richrod’s door with a pigeon that was suffering from a dislocated hip. Being known across town as the “bird lady,” Richrod, a licensed bird rehabilitator, agreed to help Cobain heal the injured bird. “I had no idea that the short encounter would wind up being such a prominent memory in my life,” express Richrod. “That one conversation has sparked countless conversations with journalists and reporters over the years.” 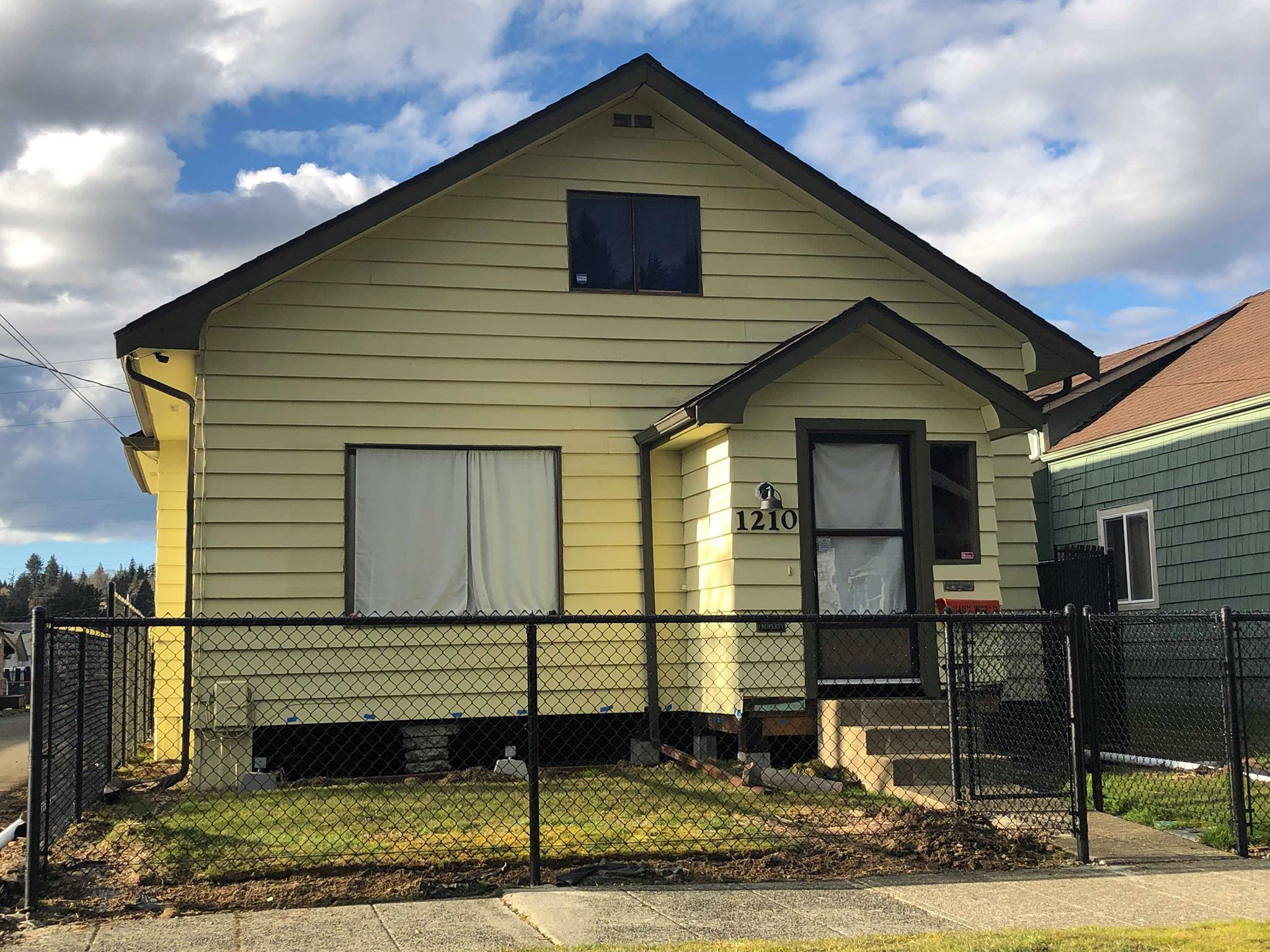 Nirvana’s music began to grow in popularity as they performed at local venues, including their first real gig at a 1987 house party in Raymond. At that time, the youth of the early ‘90s were hungry for a genre of music that they could relate to. The current musicians who were topping the charts included Michael Jackson and Billy Joel, portraying images and sounds opposite to what Nirvana was producing. The youth received just what they were wanting when the eventual quadruple platinum album, “Nevermind” was released in ‘91. With a combination of sounds and lyrics strewn about in an all-new style, the grunge phenomenon was born and spread like wildfire. The birth of this punk melody quickly led to the Seattle music scene making a name for itself as similar bands such as Alice in Chains and Soundgarden emerged, solidifying Nirvana’s rise to the top. Cobain and his bandmates, including Aberdeen native and bassist, Krist Novoselic, have been quoted as being shocked by the tsunami of support that spread around the world at such a rapid pace. While on tour in Europe in ‘91, they recall that the hit song “Smells Like Teen Spirit” could be heard on nearly every radio station on the air.

As the fame of Nirvana began to rapidly spread, many Aberdeen residents were surprised to hear how quickly this local kid had made a name for himself, including Richrod. “I honestly didn’t realize how famous he had become until someone asked me if I had heard his music on the radio,” she says. But as with many bands that are forced into the spotlight at a rapid pace and young age, cracks began to emerge.

After releasing two more studio albums, taping an episode of MTV’s “Unplugged” and performing their final American tour date in Seattle, Nirvana ventured out for a final European tour. Sadly, the tour came to an abrupt end, eventually leading to the final days in Cobain’s life and his death in the spring of ‘94. Shock waves began to spread across the globe, including throughout Cobain’s former hometown. What occurred after that, and to this day, continues to write out the story of a life that ended too soon.

“A lot of people would come in to the library to research him after he passed away,” explains Richrod. “Many of them would ask to see Aberdeen High School yearbooks in search of him, completely unaware that he was never present for any of the school photos.” To this day, Richrod and many others who knew him even on a superficial level, often receive artwork, handwritten letters, photographs and other mementos from fans eager to learn anything that they can about the artist who captured their imagination. “People would seek me out and ask about the ‘bird lady’ story or about how well I knew him from when he used to come to the library,” she adds. “The craziest story that I can remember was someone who wanted to touch me just because I barely knew him. That’s a true testament to the power of his music and the imprint that he had on so many people.”

Although the media often portrayed Cobain as having a strong hatred for the town he was raised in, Novoselic recalls in the book, On the Harbor – From Black Friday to Nirvana and other printworks that the duo would reminisce about their memories in Aberdeen and would even notice familiarities to their hometown in many of the cities that they visited. Whether you’re a fan of his music or not, there’s no doubt about the lasting memory that Kurt Cobain has left on the music industry, and in Aberdeen itself.

Sadly, the Aberdeen Museum of History was destroyed in a fire in 2018, but former Museum Director, Dave Morris, instinctually recalls the eager fans that would flock to the unique Kurt Cobain exhibit on site. “Cobain was a major draw to the Aberdeen Museum of History,” he expresses. “People literally came to visit from all over the world. Some spoke English, others knew two words, "Kurt Cobain." All of them loved being able to sit on the Schillinger's couch that he slept on and take a picture. He probably would have never believed that all these people came to Aberdeen just because of him."

Visitors looking to gain insight into the life of Cobain still visit Aberdeen and the many sites around the city that recognize him as an artist born and raised near the Muddy Banks of the Wishkah River. To discover some of the locations around the city where you can feel Cobain’s spirit, check out this article from GraysHarborTalk.com.

For a complete list of locations where you can discover Kurt Cobain’s legacy in Aberdeen, read Five Places in Aberdeen to Find the Spirit of Kurt Cobain. 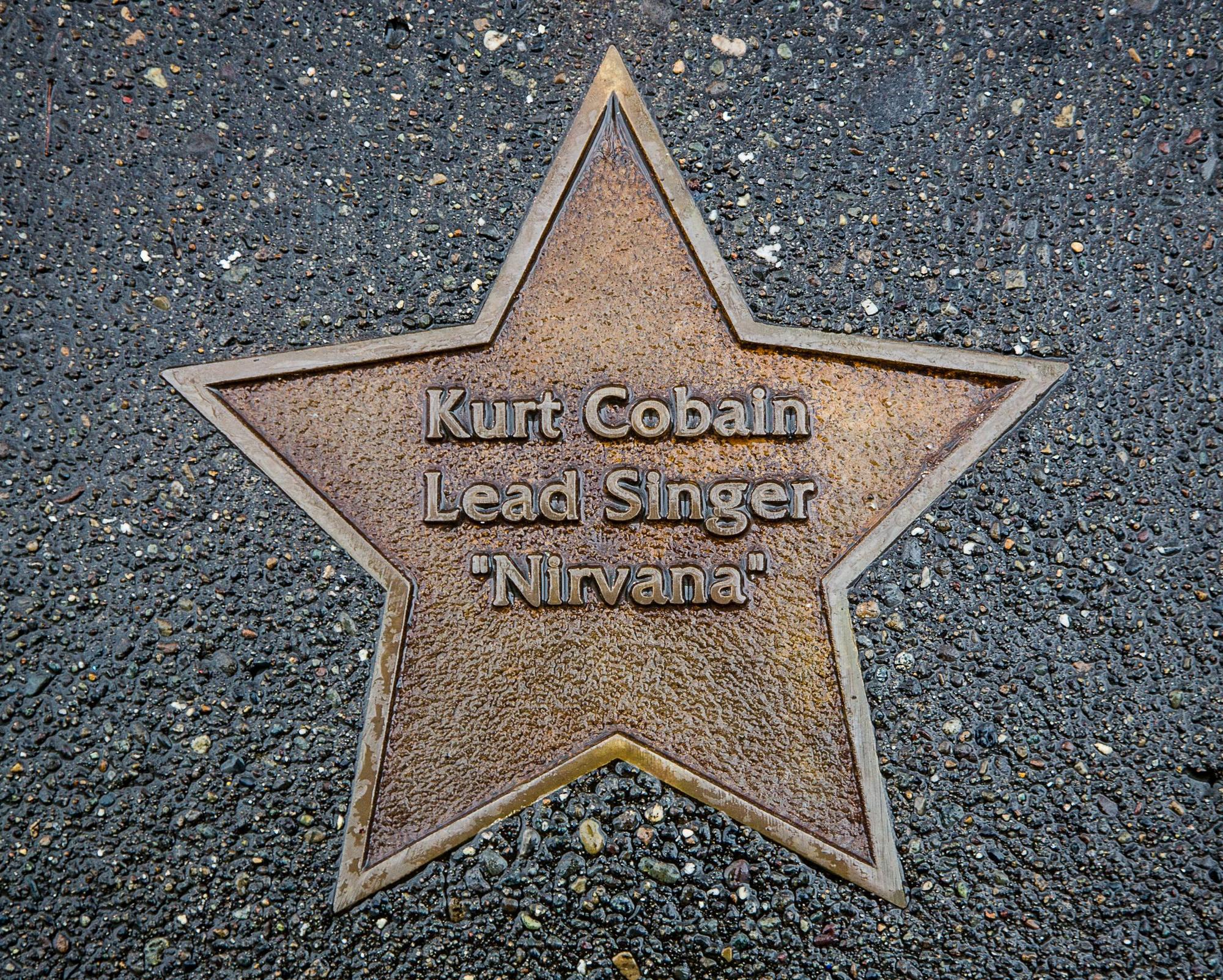 The Kurt Cobain Walk of Fame star in downtown Aberdeen. Photo by: Stuart May Photography